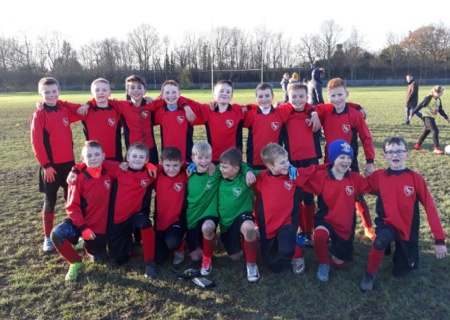 The ‘A’ team came up against Isaac Newton, Belmont B and Long Bennington in their group, whilst the ‘B’ team were grouped with Belmont A, Huntingtower and Malcom Sargent schools. After 3 hard fought games, in which each team pulled together and gave it everything they had, we were unfortunate to not progress to the semi-finals. However, both teams ended the day on a high as the ‘A’ team beat Belmont A 1-0 and it was the same result as the ‘B’ team were victorious over Belmont B. Mrs Gaylard and Mr Thompson couldn’t have been prouder of the way the boys conducted themselves throughout the day, representing the school impeccably.

On Wednesday 5th of February we took 2 football teams to Long Bennington to play a friendly before the league begins next term. First up was the A team who took on Long Bennington’s A team. After a very hard fought game where both teams had an equal amount of chances to score, it was Long Bennington who were most prolific winning the match 4-0. GHF’s A team played exceptionally well but were very unlucky to walk away from the game goalless. Next up each school’s B teams played each other, with GHF coming out winners 2-0. Goals from Mia Stevenson and Hamza Khan secured the terrific victory for our B team against a strong opposition. All players were a credit to school throughout the visit to Long Bennington and all are excited to get the league campaign underway in the next term.