Joseph and his Technicolour Dreamcoat 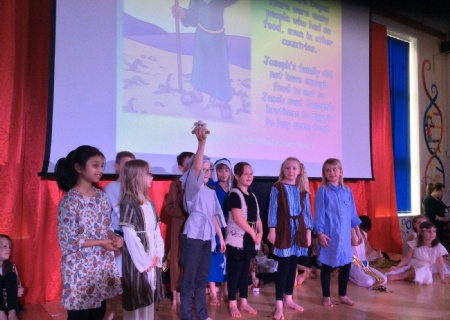 Y3/4 wow us with their fabulous performance!

On 26th and 27th of March, Year 3 and 4 performed their play ‘Joseph and his Technicolour Dreamcoat’ at the school. The performance included songs such as ‘Any Dream Will Do’, ‘Close Every Door to Me’ and ‘One More Angel in Heaven’.  The play tells the story of Joseph from the Genesis section of the Bible. Joseph’s brothers are jealous of him and his coat so they sell him as a slave to some Ishmaelite’s. Joseph ends up in jail but the Pharaoh asks him to interpret one of his dreams, leading to Joseph becoming one of the most powerful men in Egypt. At the end, Joseph is reunited with his father and his brothers.

Year 3 & 4 performed brilliantly in the play and everyone enjoyed listening to the songs and script that they have been practicing over the last few weeks. Some of us even sang along to the words that we knew! We look forward to the next school play!